Well, possibly, or at least certainly moving in the right direction.

Latest version of the manuscript being sent off with its own aged map of the East End and foreword by Jake the Prophet.

I found what I think was ‘draft six’ this morning while having a shelf clear-out – a slim-ish volume of about two hundred pages. I can just about remember thinking when I unwrapped it, fresh from ‘Aunty Lulu’, ‘Yup, reckon this is the one’ . . . then ten minutes later finding about fifteen faults and knowing the whole process will have to start again. It usually takes about a day to settle in, this realisation; a slight gloom drifting over me until the ‘sorting it out’ urge kicks in and I’m away again, happily typo-hunting and adding/subtracting needed and un-needed chunks of prose.

It’s an odd (and some would say lonely) thing, writing, not just the actual pen to paper, digit to keyboard but all the other stages: rounding up a rampaging idea, rough drafts, fairly solid-looking spiral bound manuscripts, a trial copy, re-writes, BIG edits, small edits, typo edits, adding chapters, etc. But in the later stages when people really start reading and commenting, adding useful thoughts and sometimes suggesting vast deforestation (a tad disturbing at the time but usually 99% invaluable)  it becomes less of a lonely occupation and more of a team effort. Recently I’ve had some excellent help; suggestions that made me wince a little at the thought of the amount of manuscript archaeology that would be involved, but it’s all good stuff, brain-flexing, writer-muscle building and laying down work practices for the next tome . . .

On the same dust-ridden shelf, I also found my first ever (or at least one that Mum kept) story book. Written in pencil (and coloured pencil!) in a khaki-green school exercise book, this particular tale describes a crocodile eating a small boy – with a correction by Mrs War (I still remember her, with fear) for not using the past tense of eat. 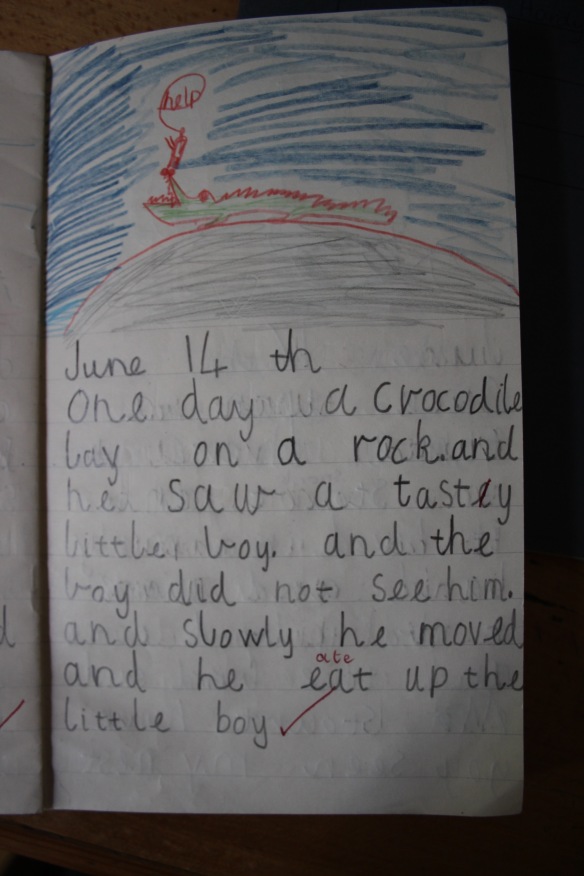 Thanks all of you!

About twenty years ago I lived in a fascinating little town set in the Derbyshire hills – Wirksworth; place of winding little secret lanes, ancient church, many pubs, glorious countryside and eclectic mix of people – original Wirksworthians, artists, musicians, teachers, etc – many people drawn to the town for its unusually ‘genuine’feel – no chain shops or cafés . . .

After a few years, a group of friends including myself, started up an art trail to encourage people to explore the town’s very interesting architecture. A couple of seasons on the art trail became attached to the festival, which then grew each year to become what it is now – a nationally recognised and much appreciated yearly art and music event.

This year, Mark (musician husband who also worked on the festival in the early years) and myself have been invited back to participate.

Mark will be performing, ‘Resonance’ a series of piano works influenced by landscape, and I will be ‘assisting’ (not quite sure in what capacity yet) with the performance/readings of extracts from my novel Hoxton.

Hoxton is with an agency at the moment, so I won’t have books to sell – who knows what further edits will lie ahead . . .  but I will have copies of my short stories available – Dog, and Other Tales. And . . . I have been assured by a grammar specialist that my gut feeling about a comma after Dog was the right decision, ha! (Does anyone really know?)

Wirksworth festival starts from the 9th of September and runs for two weeks. The art trail is on the first weekend, this year showing over a hundred and fifty artists’ work.